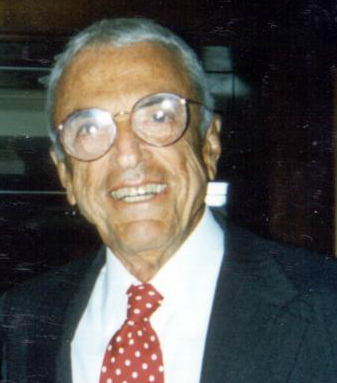 Jerome Siegel passed away on March 25, 2016 while vacationing at his villa in Casa de Campo, Dominican Republic.

Jerome, a lifelong entrepreneur, founded The Titan Industrial Corporation in 1946 and remained as Chairman until his retirement in 1994. Under Jerome’s leadership, Titan became a major player in the global steel and commodity markets, receiving the famed President’s “E” Award in 1965 for the largest independently-owned U.S. exporting company. Jerome also founded Henry Realty, a firm focused on real estate ventures and other investments.

Jerome Siegel lived a long and meaningful life. Born May 24, 1917, to Henry and Sophie Siegel, in Newark, NJ, he was educated at Erasmus High School; graduated with a BS from City College, NY, and an MBA (1939) from Harvard Business School; and was a Lieutenant in the US Navy during WWII.

Jerome married Jeanne Siegel in 1940 and had two daughters, Elizabeth and Carol. Jerome married Ruth Leff Levin in 1967 and they remained lovingly married until her death in 2011. Together they had one child, Henry Siegel. Ruth’s children from a prior marriage, Michael, Stephen, Robin and Bill, all became part of Jerome’s extended family. Altogether, Jerome and Ruth had 17 adoring grandchildren.

Jerome was especially proud of his active Board role at Big Brothers/Big Sisters of NYC for over 20 years, where he recently funded the Urban Assembly School for Global Commerce in Harlem, as well as his Board service and philanthropy involving The Ruth Leff Siegel Awards for Excellence in Pancreatic Cancer Research, Westchester Community College, Sarah Lawrence College, and The Weizmann Institute of Science.

Jerome was an incredible father and grandfather, a fantastic friend, and a lover of life. He was a legendary leader for his family, friends, community and business associates, and kept an active, engaged life up to his final moments.

___
Titan Steel Corporation is an independent global steel distributor specializing in tinmill and flat rolled products. Founded in 1946, Titan Steel has over 65 years of global sourcing, processing and distribution experience. Customers in over 30 countries rely on Titan Steel every day, and we have deep relationships with the leading steel mills around the world.